A breakneck plot and an intimate, elegant framing device give you a lot to like in Winter Guard #2, but everything’s not what it needs to be in Mother Russia. Thin characterization straps a weight around this story’s legs, but there’s still a lot to like.

The book starts with Darkstar focused on bigger ideas than her current situation, and to see that play out as a framing device is very, very clever. Likewise, this fun Ryan Cady script shows Darkstar’s dedication to heroism, which is also engaging.

The problem becomes where it clashes with the rest of the team. Are the Winter Guard supposed to be heroes or instruments of policy? There doesn’t even seem to be a consensus amongst the people here, let alone the rogue elements of the White Widow and Red Guardian (who are nowhere near as entertaining as the cinematic versions, having a wholly different relationship). Even the Russian government presented here wavers between wanting to field a response unit that can save people and the more clandestine dirty work that’s the wheelhouse of Red Widow, a mysterious latter-day graduate of the Red Room that created the White and Black Widows.

The artwork by Jan Bazaldua, Federico Blee, and Ariana Maher leans more towards a Dark Avengers vibe, with the likes of Chernobog prompting Darkstar to ask if he wants to “Kill me? Kiss me? Eat me?” Likewise, he has to be reined in (“You will not harm a soul while we’re here, creature”). The action scenes are dynamic, but because there’s so little to go on with such a large cast, the less kinetic scenes aren’t as strong.

If you’ve been dying for a look behind the iron curtain, this is a solid book that gets a number of things right. However, the issue falls short of greatness, but many have said that about the erstwhile Soviet regime, so perhaps it’s on-brand. RATING: HONORABLE MENTION

Winter Guard #2
By Ryan Cady, Jan Bazaldua
The Winter Guard team must split up in hopes of catching up to Red Guardian and the White Widow, who seem to always be one step ahead of them. It’s a race across Russia as the team must venture to Red Guardian’s hometown in hopes of discovering the secrets of project SNOWBLIND. But with Crimson Dynamo in critical condition, can the Guard keep it together to uncover the truth in time? 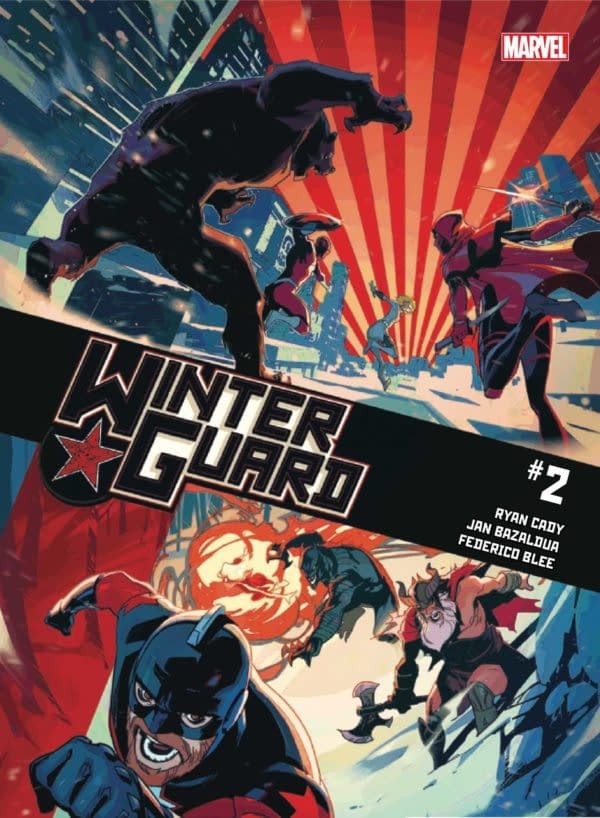 A house divided against itself cannot stand, so how does that bode for a team of morally conflicted “heroes” chasing the sins of their fathers?