There’s Someone Inside Your House arrives on Netflix today and at a time when slasher films are experiencing a new peak. Talk about living for another day; this is the fifth significant resurgence of the genre, after the birth of the slasher in the ’70s with Halloween and Texas Chainsaw Massacre, the boom of the ’80s with Jason and Freddy, Scream in the ’90s, and the CW slasher craze of the 2000s. Hell, slasher films go back even further than the ’70s, as many would point out. But they became a force in the ’70s and have been presenting pressing social issues since.

Into this slasher world enters There’s Someone Inside Your House, a fun and entertaining horror film that many slasher fans will enjoy. When high school students start dying at the hands of a masked killer, a group of friends must come to terms with some of their darkest secrets, all while trying to find out who among them may be the murderer. The big hook with the slasher in this one is that they 3D print a mask of the victim and wear it as they kill them, all while revealing their secrets to the world. It is a great hook, and it is what made the book by Stephanie Perkins popular.

The things that these kids go through would be tough for any adult, let alone high school children, but the strong cast sells it to an unbelievable degree. All of them are great, though the strong lead performance by Sydney Park is a standout. She has some serious Jamie Lee Curtis vibes going here, very relaxed and strong throughout. She is a serious talent. Ditto for the rest of the kids played by Théodore Pellerin, Asjha Cooper, Dale Whibley, Jesse LaTourette, and Diego Josef. One wishes that they were not trapped in a horror film and we could just watch a drama with their little group instead. We actually care when they start dying, and you feel something when one of them is taken away.

But they are in a horror film, and while the ending of There’s Someone Inside Your House can be seen from about a million miles away, that doesn’t mean that director Patrick Brice and screenwriter Henry Gayden are not game to keep us hooked. Gayden has laced this screenplay with plenty of neat references and well-developed characters. Brice really knows how to set up a kill as well, and boy, there are some brutal kills here. There are no punches pulled, both from a horror standpoint or from some of the issues tackled here. Bullying, homophobic hazing, white supremacy, and opioid abuse are all touched upon here, upping the moralistic aspects of the story, but never to a degree where it dips into cringe territory.

Where the film stumbles is the final act, as again, there is no mystery here. Once that is figured out, the last 15 minutes or so dives headfirst into slasher tropes and drags big time. The killer’s identity almost doesn’t matter here though, what matters is that these characters went through something, faced down fear, and came out on the other side.

With such strong characters and writing, this will make for a great watch this Halloween season. Netflix is already not doing enough to promote this film, which is also great. There’s Someone Inside Your House will get great word of mouth all month long and will find success, thankfully. This is one to enjoy.

There’s Someone Inside Your House 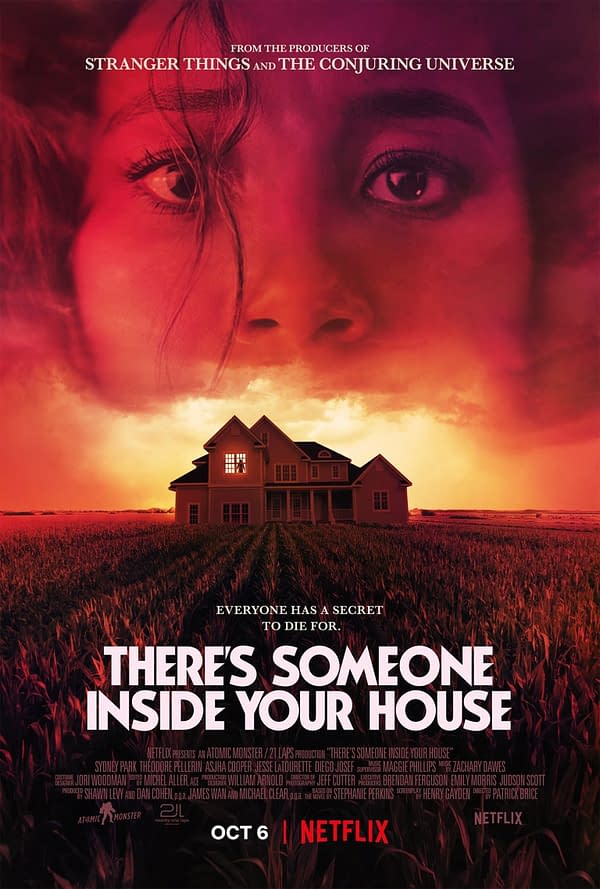 There’s Someone Inside Your House is a fun, entertaining slasher film that features a strong ensemble cast and some brutal kills.

| When it comes to Dune, the thing that people have been worried about for months ...
By Rambo
October 23, 2021

| The forever in production Uncharted movie might actually make it to the big screen next ...
By Rambo
October 21, 2021

| During the Universal presentation at CinemaCon, we got to see the trailer for the ...
By Rambo
October 21, 2021

| Actor Riz Ahmed knew he was always destined for bigger and better things for ...
By Rambo
October 21, 2021

Uncharted Trailer Is Here, Holland/Wahlberg Adaptation Out In February