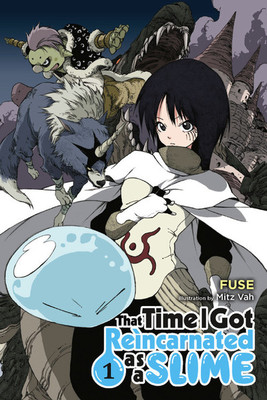 The author’s note in the 19th volume of author Fuse and artist Mitz Vah‘s That Time I Got Reincarnated as a Slime (Tensei Shitara Slime Datta Ken) light novel series revealed on November 30 that Fuse is planning to end the novel series in three volumes.

The novels entered its final arc in the 18th volume on March 31. Fuse also previously announced that he is considering writing side stories (spinoffs) after the current series is complete.

Fuse serialized the story on the “Shōsetsuka ni Narō” (Let’s Become Novelists) website from 2013 to 2016, and the series has since garnered over 400 million page views. Micro Magazine began publishing the series in print in 2014.

Yen Press licensed the novel series, and it describes the story:

Lonely thirty-seven-year-old Satoru Mikami is stuck in a dead-end job, unhappy with his mundane life, but after dying at the hands of a robber, he awakens to a fresh start in a fantasy realm…as a slime monster! As he acclimates to his goopy new existence, his exploits with the other monsters set off a chain of events that will change his new world forever!

The first television anime of Taiki Kawakami‘s manga, itself an adaptation of the light novel series, premiered in October 2018. Crunchyroll streamed the anime, and FUNimation Entertainment streamed an English dub.

The franchise will have an anime film in fall 2022.

Source: That Time I Got Reincarnated as a Slime novel volume 19

You and Me/Kimi to Boku Manga Resumes in January, Ends in March – News