The official website for the anime of Yasuki Tanaka‘s Summer Time Rendering suspense manga revealed on Thursday the main cast. 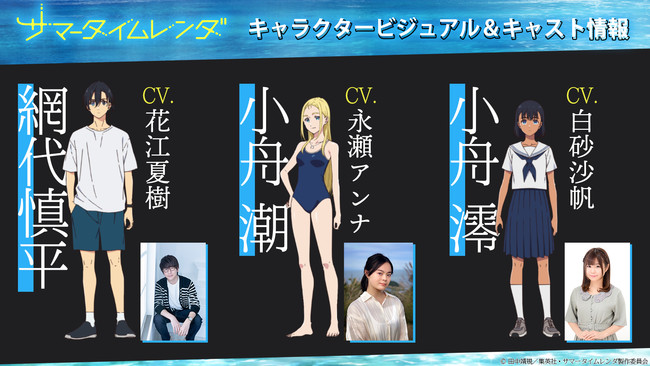 The cast includes (pictured above from left to right):

The anime will be part of the Jump Festa ’22 event, which will take place on December 18-19. The show will air on the Jump Studio (RED/BLUE) stage.

The anime will premiere in 2022. Disney+ will stream the anime worldwide and exclusively in Japan.

Upon hearing of Ushio’s death, Shinpei returns to his hometown of Wakayama City on Hitogashima and reunites with his childhood friend’s family. The funeral goes smoothly, but under the surface something strange is brewing on the island. What mysteries await him on this secluded summer island?

Ayumu Watanabe (Space Brothers, Children of the Sea) is directing the anime. Hiroshi Seko (Jujutsu Kaisen, Attack on Titan, Mob Psycho 100) is in charge of the script and series composition. Miki Matsumoto (Major 2nd, Angels of Death is designing the characters. Kusanagi (Higurashi: When They Cry – GOU and SOTSU, 22/7) is in charge of art. NieR series composers Keiichi Okabe, Ryuichi Takada, and Keigo Hoashi are handling the music at MONACA.

In a message celebrating the initial anime announcement in January, Tanaka discussed going with the anime staff to scout locations in Wakayama prefecture. A real escape game was slated to run at Wakayama’s island of Tomogashima this summer, and a live-action adaptation is in the works.

Tanaka launched the manga on Shonen Jump+ in October 2017, and the manga’s 13th and final volume shipped on April 2. Shueisha launched its MANGA Plus service with the English version of the manga in January 2019.

Tapas Turns Fashionistas Into Superhero Webtoon As House Of Slay