The core sentiment of Star Wars: Darth Vader #19 echoes Anakin Skywalker’s words from Attack of the Clones, as re-depicted here: “I don’t think the system works.” With an eclectic crew of murderers at his side, each working from nuanced motivations, Vader seeks to put an end to the criminal organization Crimson Dawn no matter how much of a mess that makes in the name of “order.”

Darth Vader has drawn a number of rough customers into his violent orbit: Beilert Valance (Imperial star turned embittered cyborg bounty hunter), Ochi of Bestoon (one of the Emperor’s favorite assassins, hiding quite a bit), the Revengers (former mercenaries with a grudge against Crimson Dawn) and three members of the Assassin’s Guild in it for the money. They’re all on the outer rim world Laecor, where a small community didn’t pay their “protection money” and got a lot of heat from Crimson Dawn while a garrison of stormtroopers did nothing. Many people in Vader’s crew have a problem with this, and that leads to a hunt where almost everyone in the crew looks for a way to screw over the rest (save Valance, who never really can get his bearings), and Vader simply powers his way through anything he doesn’t like.

Giving the iconic character so little panel time often turns into mush. Greg Pak’s script maintains the threat of Vader in every moment (especially with the fantastic “what’d you expect” callback), and that’s very effective. The visual storytelling presented by Guiu Vilanova does its requisite action scenes, moments of quiet terror in Vader’s presence, and even the almost-but-not-quite heavy-handed crimson-tinted flashback scenes very well. Vader’s path is much like the name of a star destroyer — inexorable — and it’s very engaging to see people considered threatening by most scatter-like leaves in his wake. RATING: BUY.

Star Wars: Darth Vader #19
By Greg Pak, Raffaele Ienco
DARK ORDER! In the bowels of Bespin, DARTH VADER told his son he wanted to bring order to the galaxy. Now Vader’s promise is put to the test as he leads an unlikely crew of heroes and assassins against the criminal organization known as CRIMSON DAWN. What does “order” mean to a DARK LORD OF THE SITH? How far will he go to fight for it as the depth of Crimson Dawn’s infiltration becomes clearer? And what fate awaits the heroes who follow him into battle? 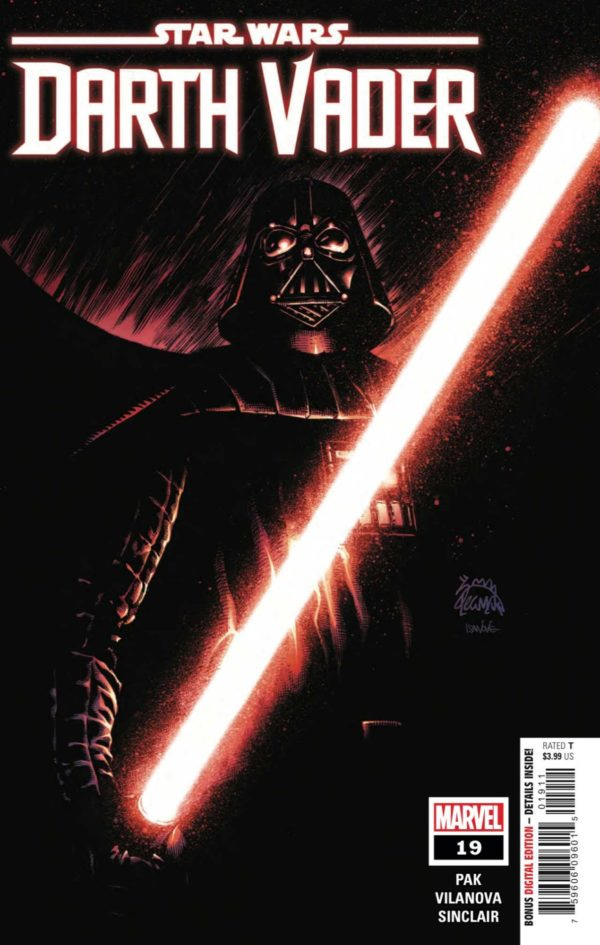 Assassins and zealots have accompanied the Dark Lord of the Sith to the outer rim, hunting Crimson Dawn, and literally, nothing can stop him this time.