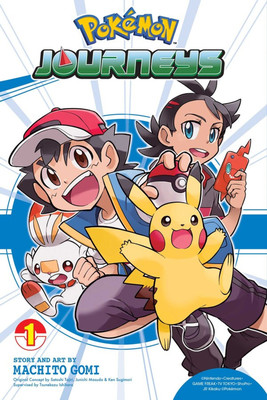 The manga adapts the Pokémon Journeys: The Series anime. Viz Media licensed the manga, and will release the first volume on November 9. The company describes the manga:

Ash is back in awesome adventures that take place across multiple regions of the best-selling Pokémon video games!

When Ash and Pikachu hitch a ride aboard the Legendary Pokémon Lugia, they discover another kid is also on board! Meet Goh, who wants to catch every Pokémon ever—including Mew!

Can Ash and Goh make their lofty dreams come true?

Pokémon Journeys: The Series premiered on TV Tokyo and its affiliates in Japan in November 2019, two days after the Pokémon Sword and Pokémon Shield games shipped worldwide. The first 12 episodes of the anime debuted in the United States on Netflix in June 2020, and the service added new episodes quarterly. The anime also premiered on the Canadian television channel Teletoon in May 2020.

Netflix confirmed in February that the new batch of episodes that it began streaming on March 5 would be the Pokémon Journey series’ final episodes.

Netflix then premiered Pokémon Master Journeys: The Series, billed as the 24th season of the Pokémon anime, on September 10.