Tim Sale‘s artwork on Batman:  The Long Halloween is much admired for its balance of black and white, smoother and more fluid than the likes of Miller and Mignola’s Batman work. And as part of this week’s Heritage Auction original comic book artwork lots, we have a page going under the hammer today, from issue 6, with Jeph Loeb’s script. 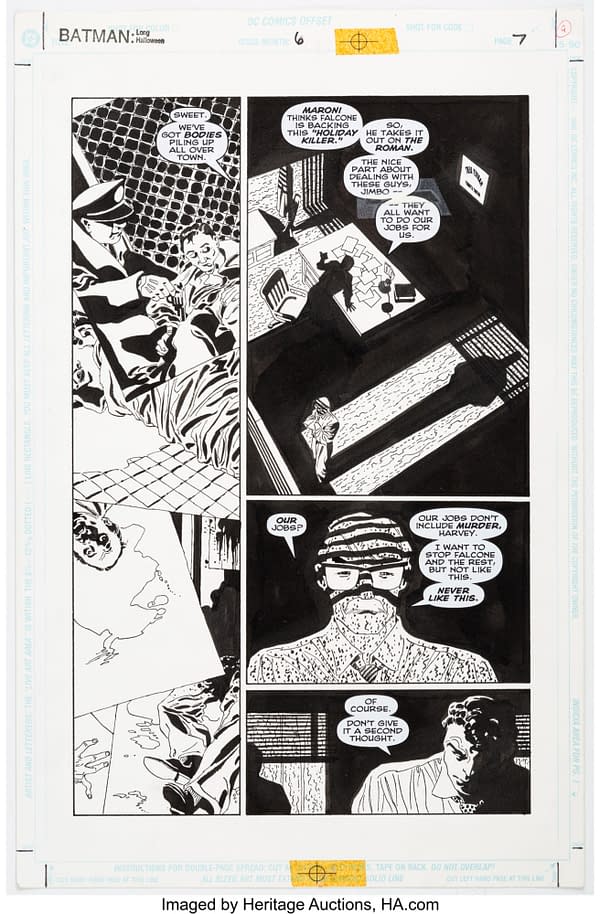 Tim Sale Batman: The Long Halloween #6 Story Page 7 Original Art (DC Comics, 1997). A moody page full of noir elements from the acclaimed limited series written by Jeph Loeb and drawn by Sale. Created in ink over graphite on DC Comics Bristol board and has an image area of 9″ x 14″. Text are stat paste-ups, marginal tape residue, with light handling wear. In Excellent condition.

Batman: The Long Halloween was a 13-issue American comic book limited series written by Jeph Loeb with art by Tim Sale. Itself the follow-up to three Batman: Legends of the Dark Knight Halloween Specials by the same creative team, the entire series has been repeated collected in trade paperback, hardcover and oversized hardcover, with the team creating two sequels, Batman: Dark Victory and Catwoman: When in Rome. Taking place during Batman’s early days of crime-fighting, The Long Halloween tells the story of Holiday, who murders people on holidays, one each month. Working with District Attorney Harvey Dent and Captain James Gordon, Batman races against the calendar as he tries to discover who Holiday is before he claims his next victim each month, while attempting to stop the crime war between two of Gotham City’s most powerful families, Maroni and Falcone. This novel also acted as a re-introduction to the DC Universe for Calendar Man, who knows the true identity of the Holiday killer but refuses to share this with Batman. He instead riddles and gives Batman hints from his Arkham Asylum cell. The story also ties into the events that transform Harvey Dent into Batman’s enemy, Two-Face and revolves around the transition of Batman’s rogues gallery from simple mob goons to full-fledged supervillains. The series ended with the main mystery of the identity of Holiday frustratingly unresolved. It was revealed there were multiple people behind Holiday, some suspects potentially dead, and who killed who. Might they be finally willing to reveal all in an upcoming sequel? It seems so as the solicitation states “Jeph Loeb and Tim Sale return to Gotham City to reveal that no secret remains buried forever!”

New Paranormal Activity Will Arrive Before Halloween on Paramount+