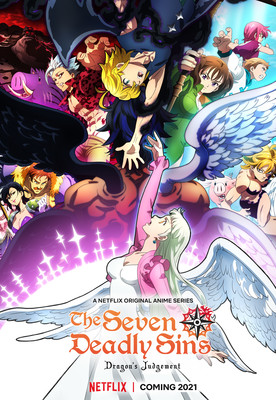 The Seven Deadly Sins: Dragon’s Judgement premiered on TV Tokyo in Japan on January 6, and aired for 24 episodes. The series was delayed from its previously slated October premiere date due to the spread of the new coronavirus disease (COVID-19). Netflix began streaming the first set of episodes in India on June 28.

While Meliodas absorbs the commandments so he can become the Demon King and save Elizabeth, Ban roams through purgatory to save his captain’s soul.

The staff of the previous The Seven Deadly Sins: Imperial Wrath of The Gods series returned for the anime. Susumu Nishizawa returned to direct the anime at Studio DEEN, with Marvy Jack collaborating on the animation production. Rintarou Ikeda returned to supervise the series scripts. Rie Nishino was the animation character designer. Chikako Yokota directed the sound, and Hiroyuki Sawano, Kohta Yamamoto, and Takafumi Wada again composed the music.

The Seven Deadly Sins: Revival of The Commandments, the second television anime series, premiered in January 2018. The anime film The Seven Deadly Sins the Movie: Prisoners of the Sky opened in Japan in August 2018. Netflix is streaming both the anime season and film in India.

The The Seven Deadly Sins: Imperial Wrath of The Gods (Nanatsu no Taizai: Kamigami no Gekirin) anime, the third television anime series, premiered in October 2019, and ended in in March 2020.

Nakaba Suzuki launched The Seven Deadly Sins manga in Kodansha‘s Weekly Shōnen Magazine in 2012, and ended it in March 2020. Kodansha published the manga’s 41st and final volume in May 2020. Kodansha Comics is publishing the manga in English digitally and in print.

Suzuki launched Mokushiroku no Yon-kishi (The Four Knights of the Apocalypse), the direct sequel to The Seven Deadly Sins manga, in Weekly Shōnen Magazine on January 27. The sequel is once again set in Britannia, and it begins at a place called “God’s Finger.”