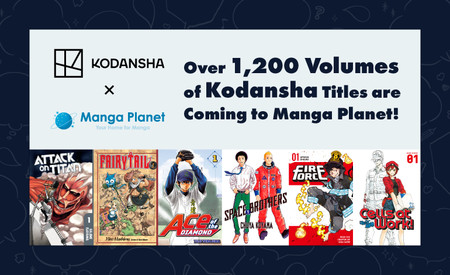 The Manga Planet manga subscription service announced on Wednesday that it is adding over 150 titles from Kodansha USA to its service this month. Titles include Attack on Titan, Fairy Tail, Ace of the Diamond, Cells at Work!, Space Brothers, and Fire Force. The company posted a full list in its press release.

Manga Planet launched in November 2019. The service costs US$6.99 per month and allows users unlimited access to English-translated manga. In addition to manga licensed from publishers, the service offers works licensed from independent artists.

Manga Planet started as a joint project between Dai Nippon Printing Co., Ltd. and Fantasista, Inc. in 2012. The companies’ goal with Manga Planet is to “[bring] new manga to fans from all over the world and support artists and the industry.”