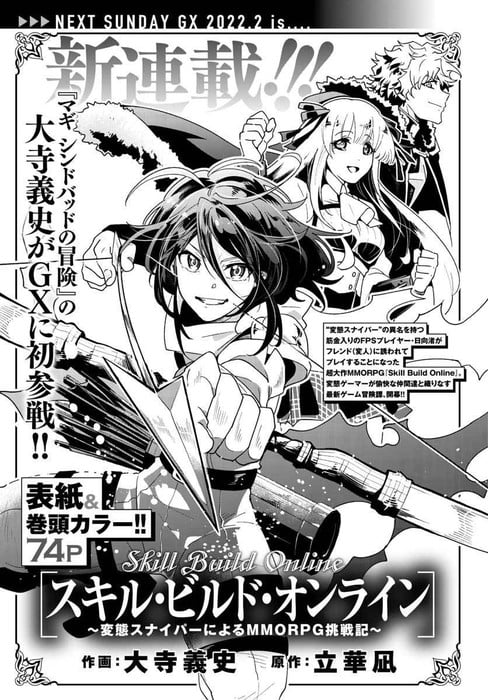 The manga is a manga adaptation of Nagi Tachibana’s web novel of the same title. The manga centers on Nagisa Hinata, a pro first-person shooter player that has proven himself one of the best players in Japan. When he wins a special prize to a new MMO called Skill Build Online after he takes another FPS trophy, he tries the MMO on the invitation of his friend. Because the game is Nagisa’s first MMO, he initially has a hard time, but after making a distinct build based off the “Ricochet” skill, he starts becoming known as the “Pervert Sniper,” and starts having fun in earnest with his fellow band of weirdos.

Tachibana began serializing the story in the Shōsetsuka ni Narō (Let’s Be Novelists) website in February 2019, and it is still ongoing.

Shinobu Ohtaka and Ōtera launched the spinoff manga Magi: Sinbad no Bōken (Magi: Adventure of Sinbad) in 2013. After beginning a full serialization in Shogakukan‘s Weekly Shonen Sunday magazine, it moved to the publisher’s web comic site Ura Sunday in 2013. The manga is a prequel to Ohtaka’s main Magi: The Labyrinth of Magic manga, which inspired a television anime in 2012 with a sequel in 2013. Magi: Adventure of Sinbad takes place 30 years before the events of Magi and focuses on Sinbad’s journey to become king.

The Magi: Adventure of Sinbad manga inspired five original video anime (OVA) episodes that shipped with volumes of the manga from 2014 to 2015. The manga also inspired a television anime that ran for 13 episodes from April 2016 to July 2016. Netflix streamed the anime in the U.S. The OVA episodes aired as episodes 2 through 6 of the television anime series.