The first 2022 issue of Kodansha‘s Evening magazine revealed on December 14 that Yuki Sato will launch a new manga spinoff of Fumiya Sato, Yōzaburō Kanari, and Seimaru Amagi‘s Kindaichi Case Files (Kindaichi Shonen no Jikenbo) manga titled Kinnyaichi Shonen no Jikenbo in the magazine’s next issue on December 28. The four-panel comedy manga will star the titular character turned into a cat. 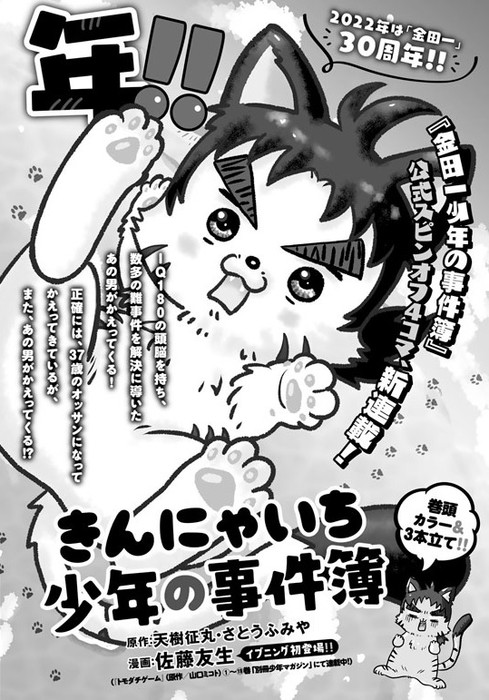 Sato previously drew the Akechi Keibu no Jikenbo spinoff manga for the franchise. The manga launched in Kodansha‘s Magazine Special in May 2014, and ended August 2018 with five volumes. The manga received a television anime special titled The File of Young Kindaichi Returns: The File of Inspector Akechi in December 2015.

The combined second and third 2022 issue of Kodansha‘s Young Magazine also revealed on Monday that Yuma Ando (one of the many pen names of Kindaichi Case Files author Seimaru Amagi) will launch a new manga titled Code: Nostra in the magazine’s next issue on December 27. Hideyuki Akashi will draw the art, while Ando will pen the story.

Amagi and Sato launched a new manga in January 2018 titled Kindaichi 37-sai no Jikenbo (The Case Files of 37-year-old Kindaichi).

Shin Kibayashi is a prolific writer who has written numerous manga under multiple pen names. Under his real name, he has written such manga as Kaze to Kaminari and Shima Kōsaku no Jiken-bo. Under his pseudonym of Tadashi Agi (which is a pen name for him and his sister Yuko Kibayashi), he is best known for the manga Drops of God. His other pseudonyms include Yuya Aoki (GetBackers), Ryō Ryūmon (Bloody Monday), Seimaru Amagi (Kindaichi Case Files original idea), Hiroaki Igano (The Knight in the Area), and Yuma Ando (Psychometrer, Psychometrer Eiji, Sherlock Bones).