Concert will screen in Indian theaters from November 26 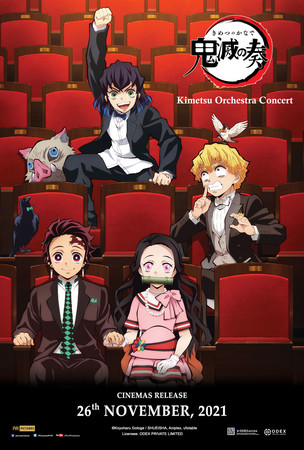 PVR Pictures announced on Twitter on Friday that it will screen the Kimetsu Orchestra Concert in Indian theaters from November 26. The concert will feature a musical performance of the Demon Slayer: Kimetsu no Yaiba television anime’s original soundtrack combined with scenes from the anime.

The Tokyo Philharmonic Orchestra played the concert on September 4 and 5 in Yokohama. The concert released on audio CD on October 9.

Hirofumi Kurita conducted the concert, and Nami Nakagawa and Maiko Katagiri provided vocals. Musical artists included: Kei Sakamoto on the bamboo flute, CHIAKi on the piano, Tohru Hasebe on the drums, Futoshi Sakai on the bass, Seigo Shishikura on the guitar, and Jun Abe on the keyboard.

Gotouge launched the manga in Shueisha‘s Weekly Shonen Jump magazine in February 2016. The manga ended in May 2020. Shueisha published the manga’s 23rd and final compiled book volume in December 2020. Viz Media is publishing the manga in English.

Merman in My Tub Manga Gets Live-Action Taiwanese Series – News