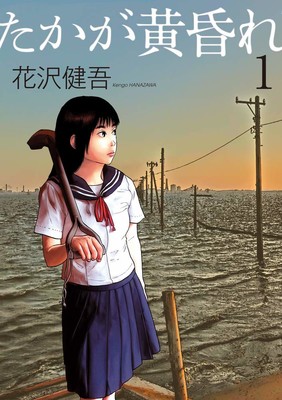 Manga creator Kengo Hanazawa revealed in a statement on Yomiuri TV‘s Kawashima Yamauchi no Manga Numa program last Saturday that he “sees no prospect” for resuming his Takaga Tasogare manga, and apologized to the manga’s readers. Hanazawa explained that the themes of the manga were “at a very high difficulty level” for who he is now, which left him discouraged from continuing the series.

The manga centers on Hinata, a girl who lives in a future Japan where men no longer exist. Hanazawa launched the manga in Shogakukan‘s Big Comic Superior magazine July 2018, but put it on hiatus soon after. A later issue of the magazine announced the manga’s return for spring 2020, which did not materialize.

Hanazawa launched the I am a Hero manga in Shogakukan‘s Big Comic Spirits magazine in 2009, and ended the series in 2017 with 22 volumes. The manga inspired two spinoff manga series. A live-action film adaptation opened in Japan in April 2016. Dark Horse Comics is releasing the manga in North America.

Hanazawa also launched the Under Ninja manga in Kodansha‘s Young Magazine in July 2018. The sixth volume shipped on Monday. Denpa licensed the manga in 2020 and will ship its first compiled volume in English in print on January 25, 2022. The manga is inspiring a television anime adaptation.