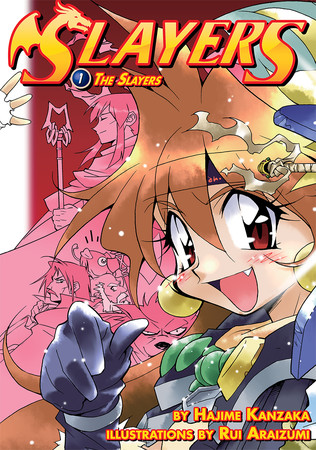 J-Novel Club announced at its panel at the Anime NYC event on Saturday that it will release audiobooks for Hajime Kanzaka and Rui Araizumi‘s Slayers light novel series. Lisa Ortiz, who voices Lina Inverse in the anime adaptation’s English dub, is narrating the audiobook.

J-Novel Club is releasing the novels digitally and in print, and it describes the classic fantasy comedy light novel series:

Beautiful and brilliant sorcerer girls just can’t have nice things, huh? All I wanted to do was swipe a little bit of bandit treasure. Now suddenly I’m being chased around by icky trolls, nasty demons, mean mummies, and brooding golem bad boys. And for what? A tiny little artifact that can bring about the end of the world? Hah! I’ll show them there’s a reason you don’t cross Lina Inverse…

Fujimi Shobo‘s Fantasia Bunko label published the original Slayers! novel in 1990, and the 15th novel, Slayers 15: Demon Slayers!, in May 2000. Tokyopop published eight of the novels in English. The 16th volume volume shipped in October 2018 as the first new volume in nearly 18 years. Kanzaka launched a “third part” for the novel series in Kadokawa‘s Dragon Magazine in July 2019.