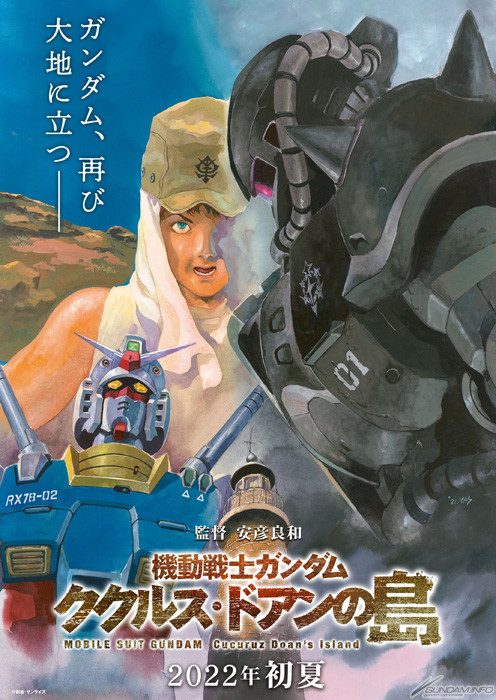 The tagline on the visual reads, “Gundam rises, once more.”

As previously announced, manga creator and animator Yoshikazu Yasuhiko will direct the film, and is now also credited with the character designs alongside Atsushi Tamura (Weathering With You) and Tsukasa Kotobuki (Mobile Suit Gundam: The Origin, Saber Marionette J). Yasuhiko had revealed in June that he was working on an unannounced anime film. Ka Hee Im is credited as assistant director. Toshizo Nemoto (Macross Delta) is penning the script. Longtime Gundam mechanical designers Kunio Okawara, Hajime Katoki, and Kimitoshi Yamane are credited for mechanical design in the film. Takayuki Hattori (Mobile Suit Gundam: The Origin) is composing the music.

Yūji Kaneko is the art director, while Nagisa Abe is the color key artist. Takeshi Katsurayama and Ryō Iijima are the compositing directors of photography. Shuhei Morita is the CGI line director, and Morihito Abe is the CGI director. Kazuhiro Nii is editing, and Sadayoshi Fujino is the sound director.

The announcement describes the film as a retelling of the 15th episode of the original Mobile Suit Gundam television anime. The episode itself has been omitted from English releases of the series.

The manga is a spinoff of Yoshikazu Yasuhiko‘s Mobile Suit Gundam: The Origin manga. The manga tells the story of Cucuruz Doan, a character who appeared in the similarly-titled 15th episode of Yoshiyuki Tomino‘s original Mobile Suit Gundam anime series. In the episode, the titular character is a Zeon pilot who abandoned his post after refusing an order.

Yasuhiko’s Mobile Suit Gundam: The Origin manga is also inspired by and re-imagines the original Mobile Suit Gundam series. Viz Media published part of the manga in North America from 2002 to 2004, before it halted publication of the series. Vertical licensed the series in 2013, and released all 12 volumes.

The manga inspired a six-episode anime project in Japanese theaters from 2015 to 2018. Yasuhiko worked as chief director, character designer, and storyboarder for the anime. A 13-episode television series recompilation of the anime premiered in April 2019.

Cucuruz Doan’s Island is set to be released in Japan in the summer, 2022 » Anime India