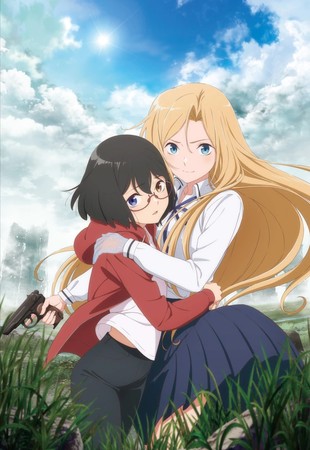 Funimation announced on Sunday that it will stream an English dub of the television anime of Iori Miyazawa‘s Otherside Picnic (Urasekai Picnic) science-fiction yuri novel series starting on Monday. Funimation will stream all 12 episodes at once.

The company also revealed the English dub cast and staff.

The anime premiered in Japan on January 4. Funimation streamed the anime with English subtitles as it aired in Japan.

Takuya Satō (Kase-san and Morning Glories, Steins;Gate, Fragtime) directed the anime at LIDEN FILMS and Felix Film, and he was also in charge of the series scripts. Ayumi Nishibata (Kuromukuro animation director) was the character designer and chief animation director. Kazutaka Ema was the creature designer and Hiroki Matsumoto was the art director. Takeshi Watanabe (To Love-Ru, Saki, Ro-Kyu-Bu!) composed the music. CHICO with Honeyworks performed the opening theme song and Miki Satō performed the ending theme song.

J-Novel Club is publishing the novel series digitally in English, and it describes the first volume.

Her first encounter with Toriko Nishina was on the Otherside after seeing “that thing” and nearly dying.
Ever since that day, exhausted university student Sorawo Kamikoshi’s life changed. In this Otherworld, full of mystery, which exists alongside our own, dangerous beings like the Kunekune and Hasshaku-sama that are spoken of in real ghost stories appear. For research, for profit, and to find an important person, Toriko and Sorawo set foot into the abnormal.
A tale of two girls’ bizarre exploration and survival, brought to you by an up-and-coming Sci-fi author!

Hayakawa Publishing has been publishing the novels with illustrations by shirakaba since February 2017. Eita Mizuno‘s manga adaptation of the novel series launched in February 2018 in Square Enix‘s Shonen Gangan magazine. Square Enix Manga & Books is releasing the manga in English.