Rob Salkowitz, author of Comic-Con and the Business of Pop Culture, wrote an article for comic book retailer site ICV2 last week on webtoon comic creation, looking at comic book industry moves into digital and specifically mobile digital in the comic book industry, including DC’s deal with Webtoon and Tapas’ hiring former DC Comics editorial staff. Promoting the article he tweeted “New platforms blur the line between comic professionals and aspiring amateurs, changing the publishing landscape” with the article saying “some saw it as just trading down the DC brand by mingling the material with a lot of substandard fan-created content that’s prevalent on mobile subscription-based comics platforms. That last point is crucial because it touches on one of the hot button issues in the industry, the well-policed line between professional and amateur. Technically, a professional is anyone who gets paid for doing what they do, so even low-earning webtooners qualify, same as the aspiring artist who gets $50 for a story in a small press zine.  Still, there was, until recently, a pretty clear demarcation between work produced to the standards of Marvel and DC, and the stuff you could find on a Tumblr page or self-published material peddled at an artist alley table. Webtoon and their cohort have made a business blurring that line. Yes, some of the site’s top content gets paid readership far, far beyond anything that traditional comics could aspire to, but those superstar performers are at the peak of a steep power curve with a very long tail. Upwards of 80% of material appearing on these sites is the work of fans, amateurs, or very early-career professionals.  Some of it is good, some of it gets good after a while, and some of it needs work. If you’re expecting consistent standards of excellence, you are obviously looking in the wrong place, and because of that, the polished professional work that does appear on those sites can seem like the ritzy couple in evening dress lined up for a $1 pizza slice.” 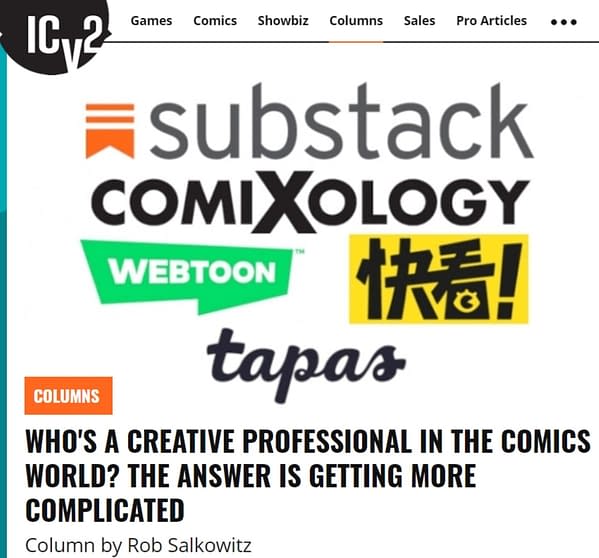 While intended for the comic book retailer audience, published online it soon spread further, and many comic book creators, both in print and in digital, weren’t entirely sure that this was a valid take and said so. And Rob interacted with them, as he realised that the audience for the piece was suddenly a lot wider than the intended one. Here is just a smattering of some of the response on Twitter alone.

We look forward to the inevitable sequel article taking in all these comments as well. Fanboy Rampage was a blog by Graeme “Graham” McMillan dedicated to comic book back-and-forths online. McMillan has moved on now, becoming a proper journalist for the likes of The Hollywood Reporter and Wired but he gave permission to Bleeding Cool to revive his great creation.

Potion Craft Will Be Released On Steam In Late September