This year’s 50th issue of Kodansha‘s Morning magazine revealed on Thursday that Shū Okimoto is launching a new manga titled Yoshiwara Platonic in the magazine’s next issue on November 18. Okimoto is drawing the art, while Fujikawa Yotsuba is writing the story. The magazine teases the manga as centering on a platonic relationship between a food-loving courtesan and an otaku samurai. 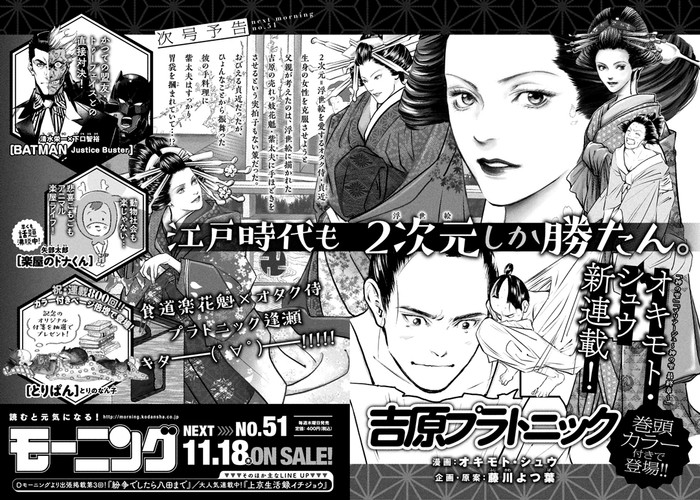 The manga centers on Sadachika, an Edo period samurai who is obsessed with ukiyo-e art. In an effort to teach him the ways of winning over women, Sadachika’s father takes him to one of the most desired courtesans of the Yoshiwara red light district, the high-ranking tayū Murasaki. Sadachika is nervous when he meets Murasaki, but what ends up starting their relationship is Sadachika’s home-made cooking.

Okimoto had posted on the Ganmo manga artist and assistant matching service in September that she was launching a new manga in Morning.

Siblings Shin and Yuko Kibayashi — under the pen name Tadashi Agi — launched The Drops of God manga with artist Okimoto in Kodansha‘s Morning magazine 2004. A live-action series based on the manga aired in Japan in 2009. The manga ended in June 2014, and the 44th and final compiled book volume shipped in July 2014. The manga’s final arc, titled Marriage ~Kami no Shizuku Saishūshō~ (Marriage ~The Drops of God Final Arc~), launched in May 2015, and it ended in October 2020.

Comixology and Kodansha Comics have released the manga in English digitally.

Throughout its serialization, the manga had famously boosted the sales of wines profiled in the story. The French wine magazine La Revue du vin de France has recognized the manga, giving it the magazine’s top award in 2010. The New York Times also profiled the manga in its Dining and Wine section in 2008.

The manga is inspiring a new upcoming live-action television series that will be multilingual as a collaboration between U.S., French, and Japanese companies.