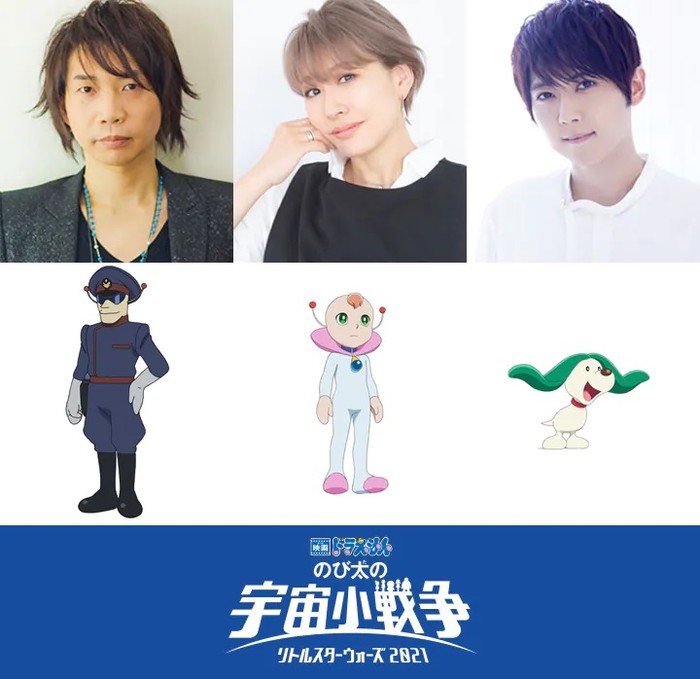 The new cast members include (left to right in image above):

The film will now open on March 4, 2022 after a delay due to the new coronavirus disease (COVID-19). The film was originally slated to open last March, but the staff delayed the film to spring.

Doraemon: Nobita’s Little “Star Wars” 2021 is the 41st film in the Doraemon franchise. The film is a remake of the 1985 Doraemon film of the same title. The 1985 film will screen in select theaters in Japan from November 23 to December 2.

Susumu Yamaguchi — a key animator on many previous Doraemon movies, unit director of Doraemon the Movie: Nobita’s Chronicle of the Moon Exploration, and the director of Mobile Suit Gundam AGE — is directing the new film. Dai Sato (Eureka Seven, Ghost in the Shell: Stand Alone Complex, Listeners) is penning the script. Official HiGE DANdism created the theme song “Universe” specifically for the film. Shirogumi, the 3D CG studio behind the production of the Stand By Me Doraemon films, will handle the CG for the spaceships in the film.

The Nintendo Switch game based on the anime film was also delayed to an unspecified date. The party game was originally scheduled to release last March alongside the film. The game’s website currently does not list a release date.