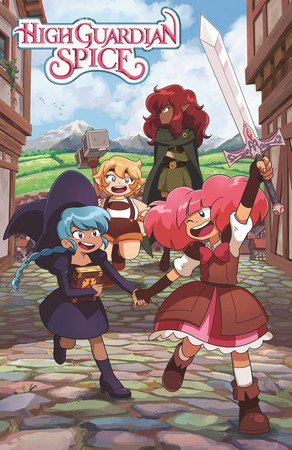 Crunchyroll had announced High Guardian Spice in 2018 as the first “Crunchyroll Originals” animated project, and the show was originally slated to premiere in 2019. Rodriguez announced in November 2019 that the show had finished production.

All 12 episodes of the series will be available on October 26.

Crunchyroll also announced the 2022 premiere of its FreakAngels “Crunchyroll Originals” animated series. The company streamed a trailer for the project.

Crunchyroll announced the project in February 2020. The series is based on graphic novels by Warren Ellis and Paul Duffield.

Crunchyroll also announced that its mascot Hime will appear in its social co-op fantasy mobile RPG Mitrasphere for iOS and Android devices in a limited-time crossover event. The company describes the in-game event:

Crunchyroll-Hime and Yuzu find themselves transported into the world of “Mitrasphere.” Landing in the center of Edol Town, the prominent city of the plainsfolk (humans), they bump into the audacious Sky Pirates in the middle of their plotting. Determined, Hime and Yuzu join forces with Matilda, Hildegard, and other familiar faces as they work to uncover and thwart the Sky Pirates’ plans to wreak havoc upon Edol Town.