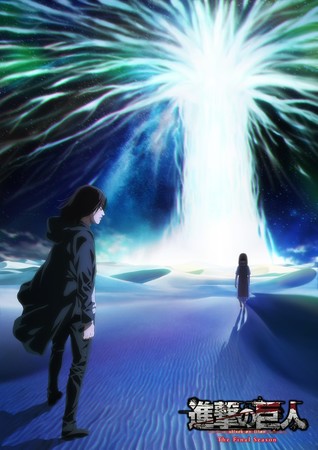 The season’s Part 2 will premiere with episode 76, “Danzai” (“Sentencing”), on the NHK General channel on January 9, 2022 at 24:05 (effectively January 10 at 12:05 a.m.) in Japan. The second part will feature a returning staff, including director Yuichiro Hayashi at MAPPA, series scriptwriter Hiroshi Seko, character designer Tomohiro Kishi, and music composers Hiroyuki Sawano and Kohta Yamamoto. The anime also features a returning cast.

Episode 75 ended in March with an announcement that episode 76 would debut “this coming winter” on the NHK General channel in Japan.

Before the new anime airs, NHK has been airing six compilation specials that cover the previous 75 episodes of the anime starting on October 24. The airings also feature the original anime episodes “Wall Sina, Goodbye” (focusing on Annie), “Lost in the cruel world” (focusing on Mikasa), and Attack on Titan: No Regrets (focusing on Levi).

The Attack on Titan The Final Season anime premiered on NHK in December 2020. Funimation and Crunchyroll are streaming the anime with English subtitles. Adult Swim‘s Toonami programming block began airing the anime on January 9, and Funimation began streaming an English dub on January 10.

Hajime Isayama launched the original Attack on Titan manga in Kodansha‘s Bessatsu Shōnen Magazine in 2009, and ended the series on April 9. The manga’s 34th and final volume shipped on June 9. Kodansha Comics is publishing the manga in English digitally and in print, and released the 34th volume on October 19.