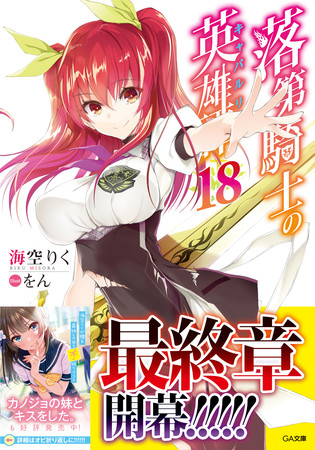 Writer Riku Misora revealed on Twitter last Friday that he plans to end his and illustrator Won’s Chivalry of a Failed Knight (Rakudai Kishi no Cavalry) light novel series by the end of 2022.

The series entered its final arc in its 18th volume, which shipped in Japan in June 2020.

Publisher Sol Press is releasing the novels in English. The company released the first three volumes simultaneously digitally and in print in November 2019, and it is releasing subsequent volumes “in set intervals.”

Ikki Kurogane is a Blazer, a person who can materialize his soul as a weapon. Unlike most Blazers, however, his
aptitude for magic is virtually nonexistent. Branded a talentless failure and nicknamed “Worst One,” he has
spent his life honing his swordplay in order to become a Mage-Knight nonetheless.

Stella Vermillion is the second imperial princess of the Vermillion Empire and a powerful Rank A Blazer. Having
spent her whole life undefeated in battle as a result of her incredible natural talent, she travels to Japan in
search of powerful opponents, hoping to grow ever stronger and become an accomplished Mage-Knight
herself.

The two meet at Hagun Academy, one of seven Mage-Knight schools in Japan, and soon realize that they
share the same goal: to become a powerful Mage-Knight renowned for their hard work and skill, regardless of
their level of talent. In order to reach that goal, their first step is to meet in the finals of the Seven Stars Battle
Festival, a no-holds-barred tournament that gathers the strongest student knights from all seven schools
across Japan, and fight for the title of Seven Stars King.

Can Ikki and Stella fight toe-to-toe with even the strongest of Blazers and achieve their dream of reaching the
peak of knighthood?

Megumu Soramichi launched a manga adaptation of the novels on Square Enix‘s Gangan Online website in 2014, and ended the series in December 2017.