Bad Idea Corp is a new comics publisher from Dinesh Shamdasani, Atom Freeman, Warren Simons, and Joshua Johns. A direct-to-retailer publisher, eschewing digital and trade paperbacks in favour of one-cover one-per-person comic book sales from big comic book names. Bad Idea has become famous for their weird publishing experiments, offers, and the insane hoops and psychological games they put collectors through in order to secure… something.

This includes only selling their comics at approximately only 200 stores worldwide when there are about 2,000 stores in the United States alone. That’s just one comic store in the UK, for example. The stores had to apply and then agree to a series of autocratic rules such as selling only one copy per customer and agreeing to sell books at cover price for 30 days after release no matter what price they were fetching on eBay.

Somehow this was working for Bad Idea. Bad Idea had so much interest they created a waitlist in the hundreds of stores wanting to sell their books. Last year Bad Idea announced that they were “over” after a final slate of five comics entitled the Final Five. We knew that was a lie. That they were planning another book with the late Ryan Bodenheim showed that, recently.

Well, now, Bad Idea has made good on part of their promise to be “over” and “fired” all 200 stores. The stores still need to follow the Bad Idea rules and sell the remaining Bad Idea books being released this and next month that were delayed due to the paper shortage.

But if they do that, they may apply to be part of a new programme that would go into effect only if Bad Idea made a “much demanded, highly anticipated and unquestionably triumphant return.” Which they obviously will.

They just emailed out the following message to retailers in general:

Additionally, applications are now being accepted for the new BAD IDEA Destination Store program which would go into effect should BAD IDEA ever choose to make its much demanded, highly anticipated and unquestionably triumphant return.

In order to apply, existing stores:

1. must keep the BAD IDEA point of purchase items prominently displayed for the time being. We have very specific disposal plans and will be in touch about those shortly.

2. must continue to honor and abide by the rest of the BAD IDEA rules through the release of the remaining FINAL FIVE issues delayed by the paper crisis and beyond.

3. must have an account in good financial standing with no past due invoices.

4. must complete the application form below.

In order to apply, waitlisted stores or those new to BAD IDEA:

1. must complete the application form below.
CLICK HERE TO APPLY FOR THE NEW BAD IDEA DESTINATION STORE PROGRAM

Please note, stores that break the BAD IDEA rules, despite today’s layoffs, will be dealt with in the same manner going forward as they would have been in the past i.e. curt phone call using from BAD IDEA in a disapproving tone followed by a possible banning.

Thank you for all your support. We appreciate you all so much and wish you all the luck in the world on your applications! We’re rooting for you!! 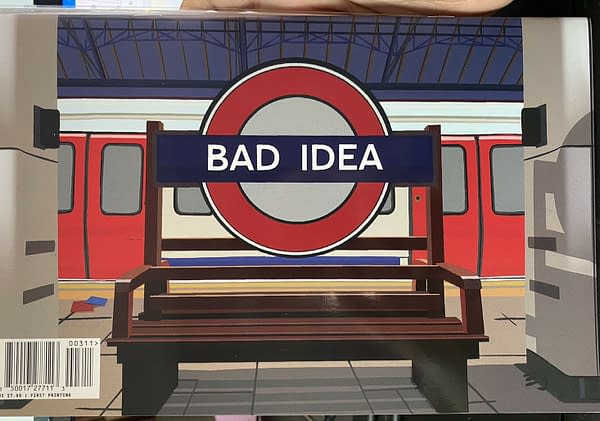 Is this an opportunity for Bad Idea to easily shed some dead weight, simply a way to keep things fresh, or a contingency, and they really plan to go away? No, of course not. They only just published the work of an up-and-coming youngster on the back cover of Odinn’s Eye #3, one 16-year-old Eve Johnston from London, UK. A comic that hasn’t even made it to the one store in the UK yet…