KOEI Tecmo America began streaming on Tuesday the first promotional video for the Atelier Sophie 2: The Alchemist of the Mysterious Dream (Atelier no Sophie 2: Fushigi na Yume no Renkinjutsushi) game, a title celebrating the 25th anniversary in Gust‘s Atelier series of games. The trailer previews story and gameplay features, including the Dreamscape Stone, which can control the weater, and Major Gathering Spots, which feature better materials than traditional spots.

KOEI Tecmo America and KOEI Tecmo Europe will release the game for PlayStation 4, Nintendo Switch, and PC via Steam on February 25. The game will launch on the same systems in Japan on February 24 (February 25 on Steam).

Atelier Sophie 2: The Alchemist of the Mysterious Dream continues the story of Sophie and Plachta’s many adventures. After leaving Sophie’s hometown of Kirchen Bell, the pair discovers a huge tree identical to one that Plachta had seen in a dream, and as they get closer, a mysterious vortex pulls them inside. Sophie awakens alone in a curious new world called Erde Wiege, and it’s not long before she hears about an alchemist named Plachta that lives on the outskirts of town.
Shockingly, when Sophie arrives at the atelier, she meets a young alchemy enthusiast named Plachta, and even though the alchemist shares the same name as her friend, she doesn’t recognize Sophie. What other surprises await Sophie on this journey? As the adventure continues, Sophie meets aspiring alchemist, Ramizel Erlenmeyer, who willingly agrees to help her in her time of need. The narrative elegantly unfolds with a charming new visual style that combines the art of the Mysterious sub-series with the high-quality graphics and animations featured in 2021’s Atelier Ryza 2: Lost Legends and the Secret Fairy. 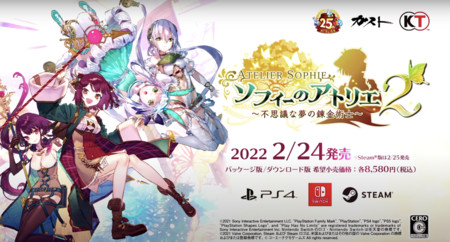 Those with save data from various Atelier games will also be able to transfer save data to the new game to get special costumes.

The game is the first work in the 25th anniversary celebrations for the franchise.

KOEI Tecmo America released Atelier Sophie: The Alchemist of the Mysterious Book in June 2016 on PS4 and PlayStation Vita. The game shipped for PS4, PlayStation 3, and PS Vita in November 2015 in Japan.