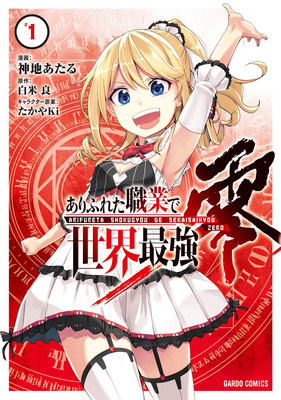 Shirakome published the first volume of the Arifureta Zero novel prequel series in December 2017. J-Novel Club has licensed the novel version, and it describes the story:

This is the story of what happened long before Hajime was summoned to Tortus. Oscar Orcus is considered a third-rate Synergist by most people. He spends his days peacefully, working so he can send money back to an orphanage. All that changes when the whirlwind that is Miledi Reisen storms into his life. Miledi sees the hidden potential in Oscar, and invites him on her journey to defeat the gods. Oscar wants no part of any journey, and he refuses. But Miledi is persistent, and the situation changes drastically when the orphanage he wants to protect is attacked. In the end, what will our unlikely hero decide?

Shirakome launched the oroginal novel series in Japan in June 2015 under the OVERLAP Bunko label, with illustrations by Takayaki, after initially presenting it on the user-submission site Shōsetsu ni Narō. J-Novel Club releases the original Arifureta – From Commonplace to World’s Strongest light novel series in English digitally, and Seven Seas has been publishing the volumes in print. Artist RoGa launched an ongoing manga adaptation in 2016 on Comic Gardo.

The series inspired an anime that premiered in July 2019 and aired for 13 episodes. Funimation streamed the series with subtitles and an English dub. The second television anime season will premiere on the AT-X channel on January 13 at 11:30 p.m. (9:30 a.m. EST), and it will also run on Tokyo MX and BS11 a half hour later.